How our stories were found: On Matt Bell’s Baldur’s Gate 2

Part of what created this investment was a precise lack of detail writers call “flatness,” a way of making room for the reader to fill in motivations, psychology, physical details, or other attributes of characters and settings…you begin to fashion explanations for this behavior, imagining its effects on the character you’ve conjured in collaboration with the game. (Matt Bell, Baldur’s Gate, Loc 685 Kindle ed.)

In this way I used to submit my impressions of life to my grandmother, for I was never certain what degree of respect was due to anyone until she had informed me. Every evening I would come to her with the mental sketches that I had made during the day of all those non-existent people who were not her. (Proust, Within a Budding Grove)

A special thing happens when you are reading two books in tandem, or working on two projects, or you watch two distinct movies or hear two musical pieces in succession: you are primed to draw from them the things that connect them–themes, ideas, phrases, words, myths, key-changes. It could be called synchronicity, but that would assume the connections are inherent, there to be found–rather, in truth, the connections are made only when there is an observer doing the connecting–the way a character might not live if an author doesn’t tell their tale. There is no sense without a perceiver. No character without an author or player. No self without a cognizant, conscious mind.

I decided this was my year of reading Proust. I’ve had France on my mind, and those tomes on my shoulders for a good long time. And I was just picking up rhythm when Matt Bell’s Baldur’s Gate 2 (Boss Fight Books) pulled on my nostalgic heartstrings. And so, those connections. 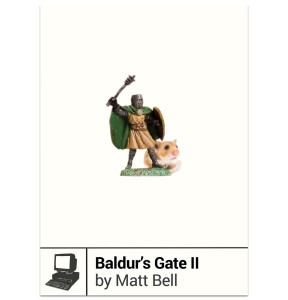 Both books, Baldur’s Gate 2 and In Search of Lost Time are, in their own ways, about solitude and the creative mind (less the mind of creative types than the creativeness of the mind), about memory and how these reflect one another, how thoughts and actions taken shape the mind (especially in early, formative years), and how later actions, patterns, sounds and sights might draw forth memories, or sensations that we attribute to memory or something deeper–synchronicity?, which might just be proximal neurons firing synchronously, ironically strengthening associative bonds, and literally creating a memory–and they are also both about becoming a writer, and how crucial these (the creativity, solitude and memory) are to that pursuit.

I played Baldur’s Gate half my life ago–I recall that summer the long hours I lost (not wasted, but rather lost in a different world) clicking away, with a vividly remembered soundtrack blasting on repeat through tinny speakers on the floor behind me. That soundtrack evokes memories of those fresh youthful months even to this day, much as Bell’s references do–guitar solos and vocal lines that turn my gut for the thought of things past, like the mention of gold boxes, Pool of Radiance, Curse of the Azure Bonds. Those old Commodore days, where the games were at once so limited and limiting and yet, despite–or perhaps because of–those bounds, liberating for the mind to do its work. I craved the jarring realism of today’s games, yet in hindsight I am glad of the interior storytelling with which I was forced to engage.

This innocence and solitary life is remembered anxiously but fondly by Bell as he maps his tale as a gamer and a fantasy reader. He keenly describes how those formative experiences, the sparseness of the games and the burgeoning, fantastical imagination, shaped him as a story-teller, and how their influence plays through his best work. His sliding between the real and the fantastic is compared to the construction of characters, how our imaginations colour the sketches.

Early in Swann’s Way, Proust describes the engagement with characters in a novel vs. real life people, and his memory of reading as a youth, which is actually very relevant now I look at it again, so I’ll quote it at length here:

Next to this central belief, which, while I was reading, would be constantly a motion from my inner self to the outer world, towards the discovery of Truth, came the emotions aroused in me by the action in which I would be taking part, for these afternoons were crammed with more dramatic and sensational events than occur, often, in a whole lifetime. These were the events which took place in the book I was reading. It is true that the people concerned in them were not what Francoise would have called ‘real people’. But none of the feelings which the joys or misfortunes of a ‘real’ person awaken in us can be awakened except through a mental picture of those joys or misfortunes; and the ingenuity of the first novelist lay in his understanding that, as the picture was the one essential element in the complicated structure of our emotions, so that simplification of it which consisted in the suppression, pure and simple, of ‘real’ people would be a decided improvement. A ‘real’ person, profoundly as we may sympathise with him, is in a great measure perceptible only through our senses, that is to say, he remains opaque, offers a dead weight which our sensibilities have not the strength to lift. If some misfortune comes to him, it is only in one small section of the complete idea we have of him that we are capable of feeling any emotion; indeed it is only in one small section of the complete idea he has of himself that he is capable of feeling any emotion either. The novelist’s happy discovery was to think of substituting for those opaque sections, impenetrable by the human spirit, their equivalent in immaterial sections, things, that is, which the spirit can assimilate to itself. After which it matters not that the actions, the feelings of this new order of creatures appear to us in the guise of truth, since we have made them our own, since it is in ourselves that they are happening, that they are holding in thrall, while we turn over, feverishly, the pages of the book, our quickened breath and staring eyes. And once the novelist has brought us to that state, in which, as in all purely mental states, every emotion is multiplied tenfold, into which his book comes to disturb us as might a dream, but a dream more lucid, and of a more lasting impression than those which come to us in sleep; why, then, for the space of an hour he sets free within us all the joys and sorrows in the world, a few of which, only, we should have to spend years of our actual life in getting to know, and the keenest, the most intense of which would never have been revealed to us because the slow course of their development stops our perception of them. It is the same in life; the heart changes, and that is our worst misfortune; but we learn of it only from reading or by imagination; for in reality its alteration, like that of certain natural phenomena, is so gradual that, even if we are able to distinguish, successively, each of its different states, we are still spared the actual sensation of change.

I never played Baldur’s Gate 2 back then, as the technology outpaced our upgrade schedule, so my story ended before this one began. In the interest of making the experience of reading Baldur’s Gate 2 more immersive, and with glee at finding its existence online and that my laptop could run it, I decided to play the game in tandem. The sounds, the images, the character utterances are straight out of my youth, a direct line of electric angst as I ponder how far I have come in the latter half of my existence, and on coming full-circle. As Bell beautifully describes, he has (we have) changed greatly, and yet what is most deeply us, our essence, maintains. This essence is what Proust seems to be trying to explore, and what he spent his life seeking.

So now I have a new soundtrack, new surroundings, new memories to connect these sounds to, and I am making my connections anew. Do I dare think about the next half of my life, when what has gone is already so vast and worthy of exploration? Into the breach, I say.

Baldur’s Gate 2 (the book) is the best sort of writing, and an exemplary of the essay form: it enlivens the subject at hand, it places it in a broader context (here, the place of games in culture, and it gives insight into the mind of the gamer), makes creative analogies (writing as analogy to character creation in gaming), and, most importantly, it is reflexive, it gives insight into the author and invites our own reflection. The book is about the creation of self, through a game who literally requires the creation of a self, and also about writing about himself, by which he creates a self.